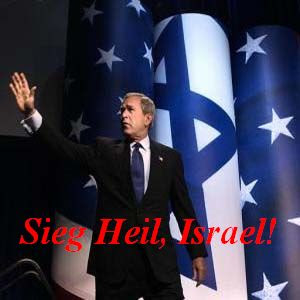 Does it seem to you - like it did to Senator Fulbright some years ago - that the US Congress is "Israeli-Occupied Territory"? - in addition to the "Israeli-Occupied Territory" of the WH, the Republican and Democratic parties, the Pentagon, US Intelligence (?) Agencies, the Federal Reserve, Government Departments (think Homeland Security), 'Think Tanks', BIG swaths of Academia, Corporate America (think 'Hollywood' and Computers), the Arts, the Diamond industry, the Garment industry, the Software industry, the Pornography industry, the Arms industry, Sports, the Mafia (called 'Mossad'), ...all the way down to your local Deli?

What, exactly, is Israeli Zionism after - in America and in the world?

Why don't they set up a "Zionist Party of America" and get their agenda out into the open?

Did one of your friends, relatives or acquaintances die or get maimed during the illegal Invasion and Occupation of Iraq? Will those who were spared escape a similar fate when Israel decides that America should illegally attack Iran or Syria or Lebanon or Saudi Arabia? (perhaps with nukes).

How is the tiny Zionist and Rogue State of Israel (with concealed nukes) able to completely dominate all of America? - especially when you consider that only about 2% of Americans are Jewish?

Is it just that "Money Talks", as they say in Las Vegas? - or is there a lot more going on here than meets the eye (of Horus)?

Is there a 'Coup d'Etat' in progress? (as Rabbi Chaim Sofer of Neturei Karta recently suggested in Annapolis) - or is it already a 'Fait Accompli'?

Have the 'Protocols of the Learned Elders of Zion' (SEE! previous posts) been followed to a 'T'? You betcha!