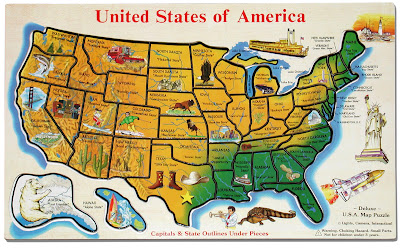 You might have heard or read about America's HUGE Federal Debt problem? - now $9.5 Trillion and actually more like $60-$100+ Trillion, if you add in unfunded Social Security and Medicare for our 'Baby Boomer' moms and dads! Every day, our politicians are wringing their hands in front of US, exclaiming "We are DOOMED!"!

Well, folks, all is not lost (or SOLD)! There is a very simple Solution to America's debt problem. What does a family do when they are faced with NO Income and HUGE Debt? Why, they have a GARAGE SALE and SELL the Family Silver, of course.

Well, WE ARE (all) FAMILY in America, right?

So, let's put some very desirable National Silver up FOR SALE and invite our International Creditors [China, Japan, Russia, Mexico, Israel, OPEC, SWFs - Sovereign Wealth Funds, etc.] to 'come on over' to see Cal - and have a look around and make some BIDS! We may prefer to LEASE some of these trinkets for, let's say 100-1000 years, with an Option to BUY at the end of the Lease.

Here's a list of some of our assets that are bound to fetch untold $TRILLIONS:

Alaska
(except for the oil)

Hawaii
(one or more of the Islands,
not already owned by Japan)

Los Angeles+
(including USC and the Golden Gate Bridge)

Our National Prison System
(China will LOVE it!)

Homeland Security, including Chertoff
(Israel will LOVE it!)

Our Armed Forces, including Pentagon
(Israel, China and Russia will LOVE it!)
Our Troops will also LOVE it!

Our National Parks System
(including Disneyland)

Texas
(Mexico will LOVE it!)

Washington, DC
(including ALL of our
lobbyists, lawyers and politicians -
elected or otherwise)
ALL Americans will LOVE this one!
This SALE should raise enough Moola to retire ALL of America's Debt for generations to come and we can immediately go back to backing the $US Greenback with pure GOLD! Our Greenback will skyrocket in value - and we'll ALL be RICH until the day we die. Our moms and dads will LOVE us, too!

America II
(an idea whose time has come!)

* All SALES
subject to approval
by the
State of Israel
(remember, they
CONTROL America!)
(for details, see 7/24 Obama Post ) 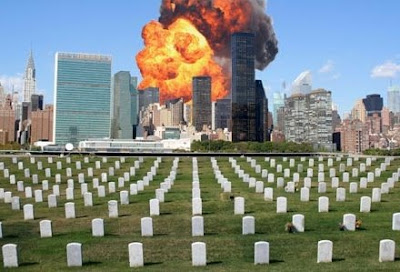 Acts of War and Treason?

When proven beyond a reasonable doubt, the unprovoked attack on America, on September 11, 2001, represents an Act of War, if carried out under the direction of, if not directly by a Foreign State. There is now an overwhelming body of circumstantial evidence that the 9/11/2001 attack was carried out by the Zionist State of Israel or its agents, including agents within the Bush Government. Extensive research to substantiate this conclusion has been conducted by Christopher Bollyn and many other researchers with impeccable and relevant credentials. There is no longer any doubt that the 'Official' explanation of the events of 9/11/2001 is a fabrication and impossibility.

When Christopher Bollyn's research and conclusions about the events of 9/11/2001 are published, we may proceed to conclude that the State of Israel committed a clandestine Act of War against the United States of America on September 11, 2001. A full and impartial investigation of the events of 9/11/2001 must then be conducted to confirm or prove false Christopher Bollyn's research and conclusions.

What must be the response of the President of the United States of America to the State of Israel, consistent with his oath of Office in defending the United States of America against all enemies, foreign or domestic? If proven beyond reasonable doubt, the willful concealment by the President of an attack on American territory by the State of Israel on September 11, 2001, must be considered anAct of Treason.

Note the 13 Stars in the shape of the Star of David
in America's Coat of Arms.
Note the arrows (missiles) in the left claw of the
American Eagle.
(In Bible Code, the number 13 signifies Satan)
It's almost time to conduct a
FULL and IMPARTIAL
investigation
of the events of 9/11/2001.

Let the chips fall where they may!

Wailing at the Wrong Wall! 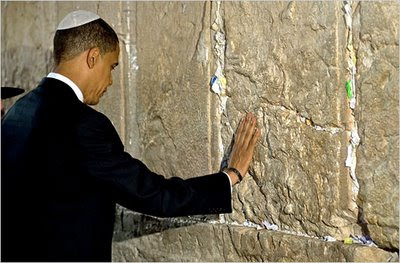 Obama paying homage to his Zionist masters.
(just like Bush!)

"Don't worry about the Americans.
We, the Jewish people, control America
and the Americans know it."
(A. Sharon to S. Peres on Israeli radio) 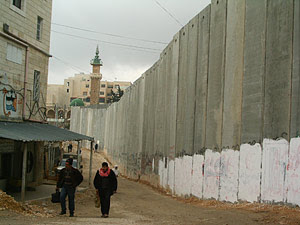 THIS is the true Wailing Wall,
where Obama should be praying
for deliverance of the persecuted Palestinians
from their racist ZioNazi masters!
(Question is: Who will he pray to?)

Posted by GodSend at 9:17 PM No comments:

The "Greenspan Depression", already in progress, should really be called the "Zionist Depression" (SEE! my previous Posts) - a stop on the road to Armageddon. That's 'Financial Armageddon' first, and Biblical Armageddon shortly thereafter.

The Web is full of Financial Blogs and Forums whose authors and majority of members are nothing more than Zionist shills, seeking desperately to deceive and conceal the true perpetrators of Zionist crimes against America and against humanity. They go to great lengths to analyze the corpse of America's economy BUT they want to conceal (at all cost) that Zionists are responsible for the financial ruin and coming suffering of millions of Americans! Remember folks, these Zionist shills work for the "Great Deceiver" and his Zionist worshipers who worship him in the "Synagogue of Satan" (SEE! previous Posts for more on the "Synagogue of Satan").

I recently published Comments in some of these Blogs and Forums and as soon as I raised the issue of: WHO DID IT (Zionists), abuse, name-calling, censoring and banning were the reactions - the typical Zionist and Neocon response.

Today, I attempted to publish a Comment on the MarketTicker Forum (Karl Denninger) under the name of EternalOptimist. For those of you who may be interested in reading that Comment, it is posted below. To fully understand this Comment, you have to read it in the context of my previous 2 Comments there and be able to SEE! my avatar on that website (or look below). In order to do that, you must register there (free). Then look under 'Daily Ticker' in the Blog Forum for my 1st Comment and in the 'Bilge' for my 2nd Comment.

Remember that in the Comment below (and the other 2 Comments on the MarketTicker Forum), the above Avatar is speaking [Mammon, the 'Eye of Horus' (Horace), Lucifer, Satan]. Here is Comment #3:
There is another financial website (among MANY others) which has a similar objective as MarketTicker: MarketWatch. You can blame anyone for the Housing Mess and coming 'Financial Armageddon' you like - BUT NOT THE ZIONIST PERPETRATORS (who also perpetrated 9/11 - among many other attacks on America). Remember folks - the Financial world is filled with worshipers of Mammon and Zionist shills working for Israel and the "Great Deceiver" (Satan). 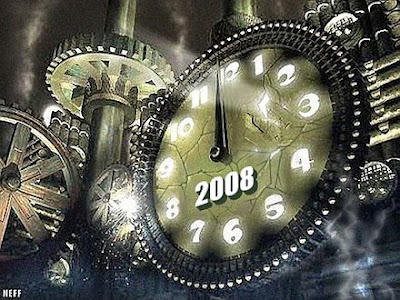 With the Housing Bubble now clearly bursting and America headed for the Grand Depression, all sorts of unsavory characters are coming out of the woodwork, seeking to profiteer from the growing fear and present or future misery of their fellow human beings. Remember this: There is NO EXIT from the approaching (Financial) Armageddon. You can run - but you can't hide. No matter how far you run, you can't run far enough to escape the Wrath of God! Buying gold and silver in whatever form will be futile (gold and silver will be confiscated - like it has been done before). Hoarding excessive quantities of food, water or gasoline will simply be an invitation for violence. Buying guns or other weapons for 'self-defense' could make you a murderer - and those weapons could well be used against you and your family. Violence is of the Devil! The coming Battle is against 'Powers and Principalities of Darkness' - the "god of this world" (Satan and his Satanic worshipers).

"Trust in the Lord with all your heart
and lean not on your own understanding".
The ONLY safety will be the protection which MAY be granted by God. He engineers all circumstances. He will guide you to safety - if that is His Will. If your time is 'up', there is nothing that will prevent His Will from being done. The most important thing to do for those who have not (yet) accepted the gift of His Son, Jesus the Christ, in order to obtain Eternal Life, is to Seek Him. He said: "Seek and you shall find". That is God's promise - He does not lie! Your seeking must be 24x7 - and with earnestness and humility. You CANNOT save yourself!

Here are some websites to stay away from - they are running scams for profit or selling half-truths to lead you away from the ONLY salvation: Jesus the Christ. He said:

There are MANY more - thousands!

Remember, Satan is also known as
'The Great Deceiver', Mammon and Lucifer.

"You shall know the Truth and the Truth will make you free"
(If the Truth does not contain Jesus the Christ,
it's NOT The Truth you need!)

Seeds of Zionism: The 'Protocols'

From the American Dollar...

...to the Israeli Supreme Court 'Eye of Horus'. 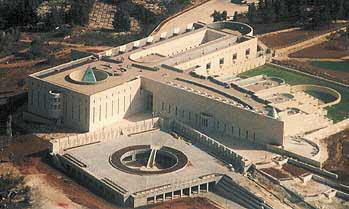 Did you ever wonder what mystical (occult) bond connects Israel and America?
Why does every important American politician swear undying allegiance to Israel?
(including Obama, McCain, Bush, Pelosi, etc.)
They know what happened to JFK - and others!

These Zionists have a Plan for America - and for the World!
What is that Plan?
(click on the Supreme Court photo and SEE!)

You may find this version of The Protocols easier to read.

Any more questions about
Israel?

"I know the blasphemy of those
who say they are Jews and are not,
but are a synagogue of Satan."
Revelation

by
Jesus the Christ - the Son of God and Messiah! 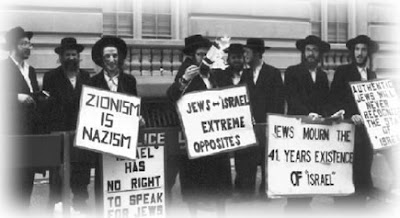 Perhaps you've heard of Alex Jones and his Prison Planet 'truth' website? One visit there is enough to convince anyone that there must be Profits in his Prison Planet gimmick. Beware of anyone who tries to sell half-truths for profit. A half-truth is usually a lie - and Deception!

Alex Jones also censors 'Inconvenient Comments' from his Blog. You might consider him a Prison Guard of the Prison Planet. Nuff said!

Posted by GodSend at 9:09 AM No comments: