GLOBAL DEPRESSION is next!

The Meltdown of the Financial Markets is just beginning - and it's not just a Recession that's coming, but a Global, Grand Depression of a magnitude far greater than the Great Depression. What's coming is the Deliberate Design of Israeli Zionists, with the Sorcerer Sir Alan Greenspan and his Apprentice Whirly Ben Bernanke 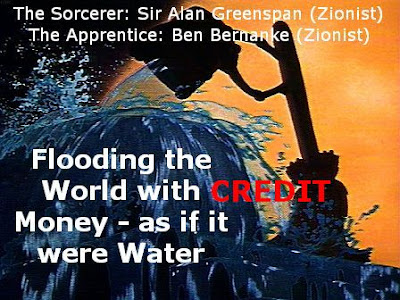 leading the destructive charge and mayhem, on instructions from their Israeli Zionist (Satanist) masters. They want a New World Order - America and Humanity be damned - literally!

The infestation of America by Zionists has been achieved according to the Master Plan of Zionism, defined in the 'Protocols of the Learned Elders of Zion'. If you're a Goy, especially a Muslim, you are a useless animal in their reptilian eyes and a prime candidate for extermination - like the Palestinians in Israel. A new 'Master Race' has emerged from Nazism and the fake Holocaust, which they have used to blackmail and extort billions from Germany, now also under Zionist control.

All of these events - and many yet to come - have been prophesied on my 'Sons of Light' website for several years! If you're at all curious about things to come and the Solution to The Puzzle, click on the 'Sons of Light' link above and begin to SEE! - the Truth that can make you FREE - at last and forever.

Don't tarry! - Time is running out and will expire in the foreSEEable future! (along with Satan and his horde of demon-possessed Zionists). Who will destroy the 'Great Deceiver' (Satan) and has the Power to save Humanity?

"He will also do it"
Do YOU also have a vital part to play in this ultimate drama?
When the Saints go marching in, YOU want to be in that Number!
YOU have been invited:
"Ask and you shall receive"
('Ask' means 'desperate pleading' or begging)