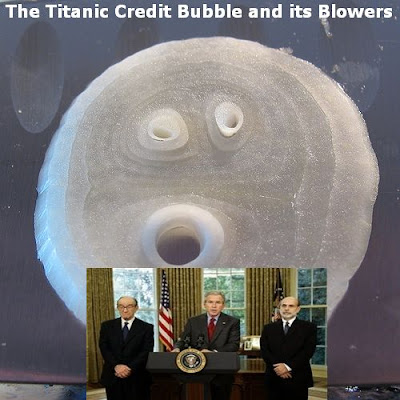 After Zionists Sir Alan Greenspan and his apprentice Whirly Ben Bernanke intentionally blew a Massive Credit Bubble, which resulted in the Titanic Housing Bubble, the 'remedy' for the planned Housing Crash and the final, lethal injection to totally kill off what's left of the wreckage of the American economy is now being readied. Are you ready for this?

They're going to RE-INFLATE the Credit Bubble - supposedly to avoid the inevitable Grand Depression! 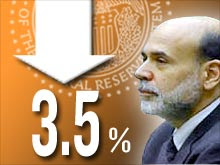 What will be the (expected) results?

DOUBLE-DIGIT INFLATION (already in excess of 10% for the CPI, after our 'elected officials' in government secretly 'reinvented' the CPI to make 'official' inflation look ridiculously small and screw millions of retirees out of most of their entitled cost-of-living increases).

A TOTAL TANKING OF THE US$

KEEPING THE FINANCIAL MARKETS ARTIFICIALLY ALIVE A LITTLE LONGER UNTIL THE INEVITABLE COLLAPSE (they are 'Dead Markets - Walking').

How about this for a slogan for the American people for 2008:

WE'RE MAD AS HELL!
AND WE'RE NOT GOING TO TAKE IT ANYMORE,
YOU ZIONIST DEVILS AND TRAITORS!
(that includes all major presidential candidates
except Ron Paul and Dennis Kucinich)