Zionists: "They are not Jews BUT...

Did you ever wonder how Yahweh-worshiping Torah Jews could possibly endorse those diabolical and murderous policies and deception that are the hallmark of the State of Israel? The only possible answer is that they are NOT Jews - but impostors! In fact, the vast majority of Israel's 'Jews' are descended from the AshkeNAZIS, also known as Khazars. They are NOT descendants of the 12 tribes of Israel but were forced to adopt Judaism as the state religion by their leaders. In other words, they are not Semites but barbarians, more closely related to Attila the Hun. That explains much of their behavior. Texe Marrs wrote an excellent explanation of the biblical verse that references those who are "not Jews but are the synagogue of Satan": 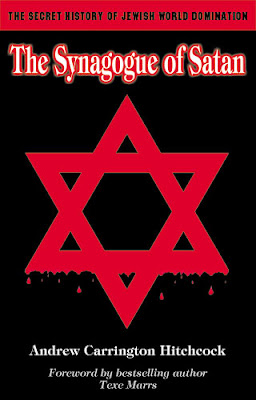 "Zionism: The Real Enemy of the Jews"
Alan Hart

EternalOptimist: Here is what the prophet Jmmanuel, whose name was altered to Jesus Christ, by falsifiers of the truth for personal gain (such as yourself), had to say about his future renaming.

“Truly, this is a vile insult, foreign to any truth.

This name has never been mentioned up to this point in time that I now speak to you.

It will only be introduced later by a person whose mind will be confused.

Once I am associated with this name, however, I will be accused of unrighteousness and lying.

This name wrongs me and I am saddened to know that I will be known by it in the future.”

According to his own words, Jmmanuel states that he has had nothing to do with the concocted teachings of the imaginary Jesus Christ. It is well known that the term Jesus Christ is simply the invention of some elements who lost their way in religion, and falsified history. The instigators who first created this nomenclature were Jmmanuel’s brother, Jacob, and a person called Paul.

Would you mind identifying the source of your quotation? Would you mind explaining how and where I've falsified truth for personal gain? The quotation does not claim that the Person Jesus the Christ is 'imaginary'. Jesus the Christ lived and was crucified and resurrected. It is a matter of historical record. He was known by several other names: Messiah, Son of God, Son of Man, Yeshu, Yahweh Yahushua, etc. Who was this Jmmanuel and what are his credentials? Was he resurrected from the dead? Was he the Son of God? Did he heal the sick and perform other miracles? Are there writings which authenticate his identity and credentials as a prophet? Which of his prophecies came true? The Word of God (Holy Scripture) is authenticated by God, Himself, including the OT as well as the NT.

You need to do a lot more than just make a few unsubstantiated claims to have any credibility whatsoever.

A Comment from anonymous has been rejected because the source of the quotation was not identified - nor was the claim substantiated that I 'falsified' the truth for 'personal gain'. Just more incoherent rambling about this Jmmanuel and denial that Jesus the Christ existed. You are invited to try again - but don't waste time with nonsense.