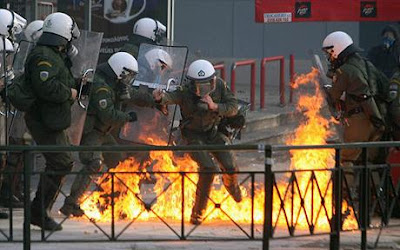 'THEM' Robocops under attack in Greece
Pay close attention to the current events (General Strike and Riots) in Greece. When 294,000,000 Americans finally realize that those Zionist Slimeballs murdered almost 3000 of their fellow citizens on 9/11 and then launched 'Financial Armageddon' (supported by their Zionist stooges like Bush, Paulson, Obama and all those Congress critters who voted for the Bailout Bill), among other atrocities approved by BushCo, ALL HELL WILL BREAK LOOSE. The first targets will be Zionists and their wealthy supporters, known as the 'Jewish Billionaires Club' and 'Israel Lobby'. Think French Revolution and guillotines. They will be 'smoked out', no matter how far they run - even as far as Paraguay and Patagonia. American skies will be darkened and polluted by El Al planes, flying the fleeing Zionist Slimeballs to Israel - where their loyalties lie. They will arrive just in time for the fulfillment of Yahweh's promise to the 'rebellious house of Israel': SEE! Ezekiel 22:20. Will the 294,000,000 VERY pissed off Americans know the difference between a Jew and a Zionist? Will they take the time to find out? Will they care? How many handguns, rifles, shotguns and AK-47s do Americans own? Are pissed off Americans known to shoot first and ask questions later? - especially when they have been robbed blind, are jobless and homeless and their children and relatives are starving and are being tortured and murdered in cold blood! YES, ObamaRahm-a, CHANGE is coming to America - and it will be a lot worse than Loose Change! 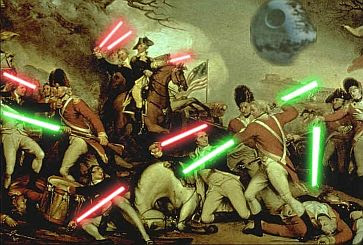