If the raping and pillaging of America by Israeli Zionists comes (STILL) as a surprise to you, you must be suffering from the 'Cattle' syndrome(*), aka the 'Male Praying Mantis' disease. You SEE!, while the Zionist Slimeballs are devouring America and millions of Americans, bite by bite, most Americans have been injected by Zionist poison (pro-Israel propaganda) for so many years that they don't even notice that they are being screwed ROYALLY by Israeli Zionists and their Goy Stooges which infest all of America - including the Federal Reserve, Goldman Sachs, CONgress and just about ALL other institutions with any influence in America. Ivy League Colleges are among their favorite BREEDING grounds. (ObamaRahm-a is a Columbia graduate). Bush, Cheney, ObamaRahm-a and Biden are just some of those 'Auslege Good Goys' which aid and abet the Israeli Zionist ENEMY in our midst. Authentic Jews (True Torah Jews) are among the most enlightened folks who are aware of the Zionist DANGER (SEE! previous post) to Jews and to America - as well as to the rest of the world.

What's happening to America now is NO SECRET - IF you are familiar with the readily available "Protocols of the Learned Elders of Zion" - the Zionist COOKBOOK for Goy 'Cattle'. If you are a Goy ('Cattle') and don't read it, believe it and SAY or DO something about it, you WILL eventually be eaten alive by those Zionist Slimeballs - and so will your children! Continued SILENCE and INACTION is like saying "Bon Appetit" while the Zionist Slimeballs are feasting on you and your children. Do THEY (who LIVE!) sound like a real NASTY bunch of Slimeballs? If you need more convincing, ask any Palestinian (still living) in Gaza or the West Bank. Or you can ask any of the relatives of the 911 victims who are still willing (and able) to talk about what REALLY happened on 911! Zionist Judge Hellerstein is making sure that NONE of them will sue ANY of the Zionist perpetrators or co-conspirators in a courtroom, and thereby EXPOSE the UGLY TRUTH about 911 and the Zionist CRIMINALS to the light of day. Nice, huh?!

Is there an 8000 TON Zionist Tyrannosaurus REX
and his brood of Zionist Slimeballs and Stooges
on the loose
in America's
living room?
YOU BETCHA! 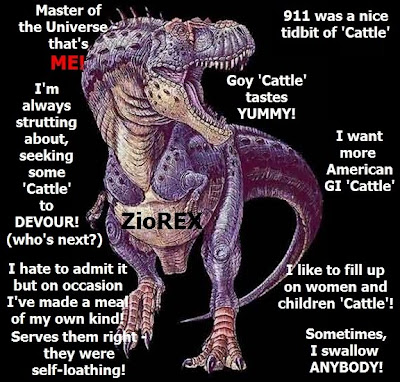 Have YOU noticed? (the Reptilians)

(*) SEE! "The Protocols of the Learned Elders of Zion"

What can I say? TRUTH is the SWORD which cuts to pieces the synagogue of satan!

To be precise, whosoever in this world is not purified and made holy by the Blood of the Lamb will be put to Yahweh's Sword and condemned to the Pit of Eternal Darkness (separated from God). That includes the "Synagogue of Satan" and everyone in it - and A LOT MORE!

Praise be to Yahweh, His Son Jesus and the Holy Spirit, indeed!