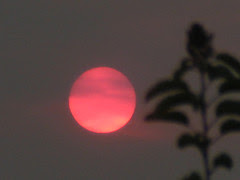 The current California wildfires were caused by a High which hovered over Southern California, generating 'Santa Ana' winds and creating conditions ideal for these fires. The areas affected were 'Red' areas, owned mostly by Republicans who had homes and businesses to lose. In comparison to most Americans, they are the 'Rich', who voted for Bush, Schwarzenegger and Zionist politicians (Pelosi, Feinstein, Boxer). These are NOT the people who are really hurting in making a living or have no medical insurance, can't afford to send their kids to College, etc.! We should not be surprised that Bush, Schwarzenegger and Chertoff are all making appearances in support of their prime constituencies! While every loss of a home or business is a great tragedy for those affected, God is issuing a warning to those who feel secure and 'comfortable', financially and physically. America's growing immorality and willful blindness towards the plight of the poor and homeless, coupled with their willingness to ignore the lies and deceit of their political leaders (Republicans and Democrats) will unleash severe Judgment from the God they increasingly reject or ignore.

This is only a relatively small warning of God's wrath, which will continue to fall heavily on America and especially on those who have 'a lot to lose'. 'Freedom's just another word for nothing left to lose'. Soon, freedom will be the only thing many Americans will have 'left to lose' - and the Zionists like Bush, Chertoff and Schwarzenegger will SEE! to it that they will also lose their freedom. The American Fascist Police State is coming, gulags, torture and all - thanks to Israeli and American Zionist influence.

For more on the near-term future of America, visit the 'Last Trumpet' website (link above) and read David J. Meyer's messages for the last few months. It's time to REPENT (change our ways and values - or else!)
Posted by GodSend at 8:48 AM