NEXT: The Grand Depression (+) 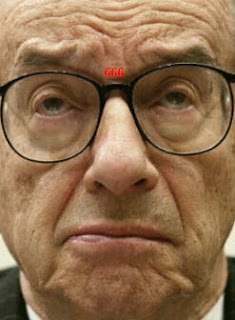 America is on the edge of an economic and social abyss, the depth and breadth of which have never been experienced. The Zionist Sorcerer (Sir Alan Greenspan) and his Zionist Apprentice (Whirly Ben Bernanke) have deliberately caused the biggest credit and related asset bubbles in the history of the Republic.


(SEE! http://tinyurl.com/3ycn9y for more on the economic disaster ahead, master-minded by Greenspan).

The US Dollar's collapse is accelerating. The price of oil is skyrocketing (that means the price of gasoline will rise dramatically). The price of gold is at a 27-year high and is on its way to the stratosphere. The Bush government is operating on credit and Ben's Federal Reserve Bank printing presses. Total debt exceeds $9Trillion (a record high). The Trade Deficit is at an all-time high and growing. Inflation is about to be unleashed and is WAY above the 'official' 2.3% CPI increase. The government is routinely lying about all economic statistics it publishes. All financial and equity markets are being manipulated to postpone the day of reckoning and the inevitable financial melt-down. The Housing bubble is bursting and prices will decline for YEARS! Municipal tax revenues will plummet as Real Estate appraisals drop and foreclosures reach all-time high levels.

Foreign governments 'own' America (China and Japan lead the way). The illegal invasion of Iraq, mandated by the cabal of 'ISRAEL FIRST' Zionists, has cost America $600+Billion and shows no sign of ending any time soon - thanks to those Zionist Democrats who take their orders from their Israeli masters rather than the people who voted them into office. The Republican and Democratic parties are the 2 wings of the Israeli Zionist party! American-built gulags are awaiting their American occupants - as soon as the Zionists 'pull off' 9/11 (II), declare martial law and elevate Dubya to the new office of Dictator. Get ready for more invasions and wars in the Middle East for the benefit of "Greater Israel" - the Israeli Zionists' dream and the world's nightmare.

Does this scenario sound familiar? Wars and rumors of wars? The Devil and his demons have been cast out of heaven, have possessed their humanoid slaves (Zionists) and are intent on destroying America, humanity and the planet! Think it's all a bit 'over the top'?

The Grand Depression, already in progress, is just the Beginning - of the End!
Posted by GodSend at 12:01 AM