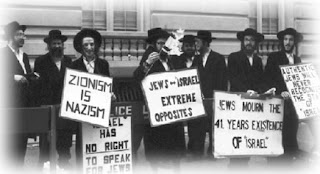 The following was written in the introduction to a religious text called “Avos Al Banim” by the eminent Rabbi Shaul Brach of Kashoa, one of the great anti-Zionist rabbis in Hungary before World War II. His words, just like the words of Rabbi Teitelbaum ring clearer than ever today. (Dr. Lazlo Toth)

“Since the dawn of the Zionist movement, suffering has not ceased to exist in the world. All the warnings of the Torah have been fulfilled in their details among our People all over the world. For a believer it is no surprise that the Zionists are the same as the heretics at the time of the Destruction of the Temple. Thus, divine judgment has been unleashed on the entire world.

“It is, however, surprising how they can continue in their ways unless they have rejected the entire Torah and the Prophets, inasmuch as they support Zionism, they must surely hope they are successful. But the Torah states, ‘...lest the Land vomit you out because of how you defiled it.’

“As far as our brethren in America who support the Zionist heresy in the Holy Land are concerned, if they don’t face up to the truth, in liberal America they will quickly feel the effects of the verse, ‘With anger poured out will I rule over you.’ May G-d have mercy.”

SEE! quotes from other Rabbis about Zionism at:

There is a wealth of information about Jewish resistance against Zionism at the above link.
Posted by GodSend at 8:14 AM