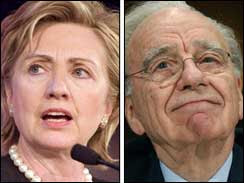 Can the Zionist Yellow Journalism Morlock (or is it Moloch?) from the land of Oz re-package tainted goods and sell them to the drugged and drunk American public as a viable presidential candidate in 2008? Never underestimate the power of AIPAC and the Israel Lobby - and the billions of annual American aid dollars to Israel (make that shekels), jingling in their deep pockets and itching to be deposited in Hillary's campaign chest. Can the criminal past be just swept under the rug by the Zionist Media? Can Hillary's brass balls for Olmert and Israel be hidden under some blue dress? Will her saber-rattling dance of aggression on behalf of Israel (with nukes, even) beguile and befuddle the American sheeple public, drowning in rivers of blood and tears shed in Iraq, Afghanistan and back home? - thanks to satanic Zionists and "Auslege Goy" like Bush.

Ask Cindy Sheehan. Ask all the skeletons of the dead in Hillary's closet. Do the dead lie? Is this what America needs while on the edge of the abyss 'Made in Israel'? Does the Devil wear Prada? - or does Hillary? When God unleashes His wrath and fury on Zionists, no punishment will be 'off the table'!
Posted by GodSend at 8:08 AM