The 'Protocols of Zion' and the Media 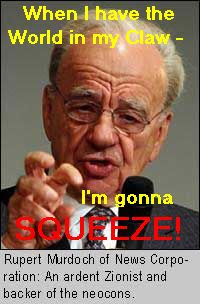 If you've done any of those things, you will know that gaining control of the Media has been (and still is) the 1st priority of Zionism. Do you realize that this critically important Zionist objective has just about been accomplished? SEE! a previous post about some of the Zionists who control the Media.


If that information comes as 'News'

to you, you have not been paying attention to who has seized control of the Media and the poisonous and mind-numbing 'messages' which are being propagated every day. Can you say: Lies, Deception, Omission and Trivia? Can you say: Personality Cults and Worship? Can you say: Debasing and Demoralizing Values? Can you say: Bashing God and Christ? Can you say: 'Official' 9/11 Cover-up?

The Devil and his followers (and others) have seized the Media and it is being used to 'dumb down' Americans and humanity. How serious is this phenomenon? It is DEADLY!

Unless the Media is freed from Zionist control and soon, Americans and humanity will be enslaved in the Zionist New World Order. If you're close to retirement, you can look forward to retiring in one of those Halliburton-built gulags! If you're younger, you can look forward to being maimed or killed in a future war for "Greater Israel" - or spending the rest of your life in slavery. The latest chapter of this gruesome story foretold in the 'Protocols' started with 9/11! The next chapter (in progress) is the Grand Depression. The Media will announce: The American economy is doing just great! (while the US$ is collapsing in front of our eyes and many Americans live out of dumpsters). Yes, it is an Orwellian scenario! "1984" is finally arriving - a little late!

The Zionist Matrix has you!
Posted by GodSend at 11:55 AM