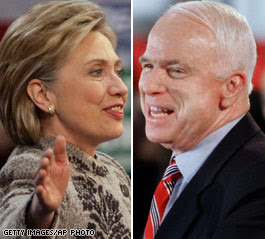 To 'Live Free' will become impossible for all Americans if either of these Zionists are planted in the WH by Israeli sayanim. There is only ONE presidential candidate who is not 'owned' by Israeli Zionists. If Ron Paul doesn't make it into the WH (for whatever reason), don't bother making out a Will! It will be time for the 'or Die' part. If you're in the American Military, prepare to die in the Middle East in the expanding war for "Greater Israel". If you're too old for Goy cannon fodder and stuck in America, prepare to die during the Grand Depression, engineered by the Zionist Sorcerer (Sir Alan Greenspan) and his Zionist Apprentice (Ben Bernanke). If you're an American patriot, prepare to die while watering the tree of American Liberty with your blood or while tortured (legally) in a Halliburton-built (with your tax dollars) American Gulag.

Happy Rampant Election Fraud in 2008!
(we use the Mossad vote-counting method,
first invented by Stalin)