'Provocations' in the Persian Gulf

According to unnamed Pentagon 'officials', Iranian speedboats 'provoked' the US Navy this past weekend - in the Strait of Hormuz and Persian Gulf, about 10 miles from the Iranian coast. 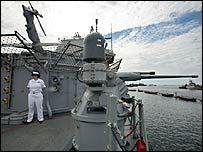 Can you imagine a few Iranian speedboats 'provoking' three US Navy Carrier Groups, armed to the teeth with the destructive (including nuclear) firepower of several times that used during WWII - and cruising within a stone's throw of Iran? Now why would Iran start a 'provocation' with the US Navy, pray tell? They wouldn't! So 'what gives?' with this announcement in the Zionist-controlled MSM (MainStreamMedia) from the Zionist-controlled Pentagon? Who is 'provoking' who?

Would America be provoked if the Russian Navy decided to cruise 10 miles off the East and West Coasts?

Remember the Gulf of Tonkin 'provocation' by North Viet Nam, used as an excuse to escalate the Viet Nam war and bomb North Viet Nam? That was a complete fabrication by the US Navy and MSM.

The inconvenient truth is that Iran has absolutely NO reason to provoke the US Navy. However, do the 3 Carrier Groups represent a provocation to Iran? You betcha!

Israel, through its control of America (SEE! previous posts about Ariel Sharon's boast that "We, the Jewish people, control America") and the American MainStreamMedia, is trying to create (fabricate is a better word) an illusory 'provocation' so that a long-planned attack on Iran will not look like the illegal and unprovoked attack which it will be! Shades of illusory Weapons of Mass Destruction which supposedly existed in Iraq. The PNAC plan for "Greater Israel" and 'Balkanization of the Middle East' is alive and well - and ready for the next chapter. That next chapter is eliminating Iran as a supposed threat to Israel.

It's now clear why control of the MSM is Zionism's FIRST priority. It allows the fabrication of whatever false reality they would like to create. Brainwashing the American public is a more accurate description of what is taking place with this phony and ridiculous Pentagon announcement of a 'provocation'.

The more interesting question is:

Will Russia honor its mutual defense arrangement with Iran if and when either Israel or America decides they want to risk starting WWIII by illegally attacking Iran. Of course, some MAJOR diversion will be needed to get Americans' minds off the Zionist-engineered (think Alan Greenspan and Ben Bernanke) Grand Depression, now on our doorstep!

How stupid do those Zionists think Americans are?

WE WON'T BE FOOLED AGAIN - EVER!