The Grand Depression: Who did it? 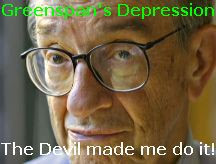 Excerpt from the Greenspan photo link:
(by Mike Whitney)

"A crash is unavoidable because the policies were designed to create a crash. It's that simple.

The Federal Reserve is a central player in a carefully considered plan to shift the nation's wealth from one class to another. And they have succeeded. Nearly 4 million American jobs have been sent overseas, the country has increased the national debt by $3 trillion dollars, and foreign investors own $4.5 trillion in US dollar-backed assets. While the Fed has been carrying out its economic strategy; the Bush administration has deployed the military around the world to conduct a global resource war. These are two wheels on the same axle. The goal is to maintain control of the global economic system by seizing the remaining energy resources in Eurasia and the Middle East and by integrating potential rivals into the American-led economic model under the direction of the Central Bank. All of the leading candidates—Democrat and Republican---belong to secretive organizations which ascribe to the same basic principles of global rule (New World Order) and permanent US hegemony. There's no quantifiable difference between any of them.

The impending economic crisis is part of a much broader scheme to remake the political system from the ground-up so it better meets the needs of ruling elite. After the crash, public assets will be sold at fire sale prices to the highest bidder. Public lands will be auctioned off. Basic services will be privatized. Democracy will be shelved.

The unsupervised expansion of credit through interest rate manipulation is the fast-track to tyranny. Thomas Jefferson fully understood this. He said:

“If the American people ever allow private banks to control the issue of our currency, first by inflation, then by deflation, the banks and the corporations that will grow up will deprive the people of all property until their children wake up homeless on the continent their fathers conquered.”

We are now in the first phase of Greenspan's Depression."
And where the devil is the Devil?