Is government to blame? (for 'Financial Armageddon') 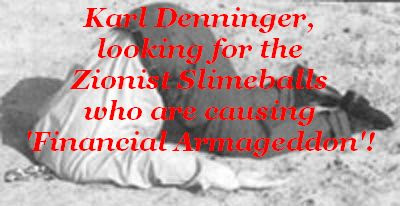 Karl Denninger, Zionist Shill Supreme, asks this question today on his website (Market Ticker) and then answers it 'YES'. Well, folks, that is nothing but a DECEPTION. The real culprits and criminal designers of the coming Grand Depression are Zionist Slimeballs, starting with Sir Alan Greenspan (the Zionist Sorcerer and author of 'Death by 1000 Cuts') and his Zionist Apprentice Whirly Ben Bernanke - and their 'Auslege Goy' Hanky-Panky Paulson, executioner of the Grand Larceny of America's Treasury. America's blood was previously donated to Zionist Israel (9/11 and Iraq Invasion/Occupation) by the Zionist PNAC gang, the Israel Lobby and their 'Auslege Goy' Bush & Co. 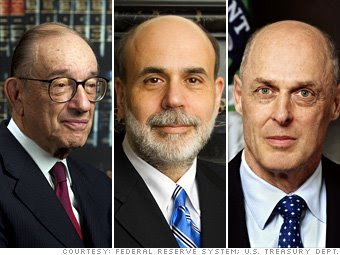 Zionist Slimeball authors of 'Financial Armageddon'
ALL of the financial gurus who pontificate all over the Web every day (some of them are right-on-the-money) are either Zionist Slimeballs themselves or are Zionist Shills, like 'Knish-Mish' (Mike Shedlock). Remember, folks, it doesn't take a genius to figure out that the Zionist Slimeballs did it (just like they did 9/11) - it just takes DELIBERATE DECEPTION not to report it! They're all desperately trying to avoid the real Holocaust. Can it be avoided? SEE! Ezekiel 22:20 for the answer. Yahweh is not a liar, nor is He the author of CONFUSION or DECEPTION. Those murderous Zionist Slimeballs worship the Devil! (Zionism IS Satanism)

"There will be gnashing of teeth"
(Zionist Slimeball teeth!)

well the govt has to get blame for all of this. They got the authority.

Behind the facade of American 'Government', there is a 'Hidden Hand', pulling the strings of the 'Auslege Goy' puppets. Clinton, Bush and ObamaRahm-a were/are mere puppets. The REAL decision-makers for America are Zionists in Israel. Like Sen. Fulbright said many years ago, the US Congress is 'Israel-Occupied territory'. It has now become 'Impregnable Israel-Occupied territory'. If any of their stooges steps out of line, it's 'lights out' for them - like it was for JFK!

What the rest of the world can look forward to soon, however, is the Zionist 'rebellious house of Israel' being MELTED by Yahweh (Ezekiel 22:20).

The US 'Government' ceased long ago making key decisions for America and for Americans. Whatever 'authority' it has left is delegated from Israel. Have you heard of ZOG? (Zionist Occupied Governments). Germany is another example.