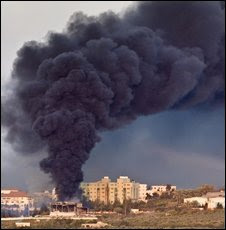 Maybe Hamas should fire some of their home-made rockets from the vicinity of the Knesset, Dimona, Tel Aviv, Herzliya and the Supreme Court in Jerusalem?! That way, the IDF will be compelled to destroy those targets as well - in accordance with their justification for completely obliterating the UN storage compound in Gaza! Who knows, with their supreme skills, THEY might hit the jackpot and set off a nuclear chain reaction of their 400+ nukes in Dimona?! What a heavenly thought! (Ezekiel 22:20). It will give new meaning to the phrase: "Inside Job". 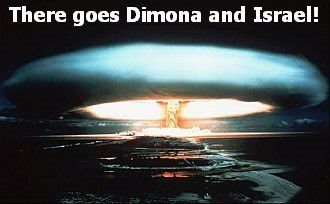 PS Where, in Hell, are the Arabs and Muslims while those Israeli Zionist Slimeballs are annihilating their Arab neighbors and religious co-believers? Are they expecting that Zionist-CIA Shill bin Laden to come out of his mythical cave and send an incendiary video to Gaza to destroy the IDF tanks? Talk is cheap! Who is running those Arab and Muslim countries, anyway??? Maybe a finger or two of the 'Hidden Hand'?
Posted by GodSend at 7:33 AM

They will never stop fighting, ever... it is a very sad situation. Would be interesting to see if Iran will get involved but I doubt they will.

It appears that the Arab mentality is the same now as it was in the days of Lawrence of Arabia - a narrow focus on tribal and, with some stretching, on national identity. This suits the 'Greater Israel' ambitions of the Israeli Zionist Slimeballs just fine! They will continue to terrorize and eradicate the Palestinians until they have all left or are dead. Then they can build many new Settlements. Of course, that was the GAMEPLAN even before 1948. The Zionist leaders knew that they had to 'get rid of' the Palestinians - one way or another - eventually.

Who knows, maybe Yahweh wants to clear Palestine of everyone who is not part of the "rebellious house of Israel" before He does His MELTING thing?! I would strongly advise all Jews living in Israel to 'evacuate' ASAP, along with the Palestinians. Israel was never intended to be the 'Homeland' for real Jews - it was intended to be the swamp of Zionist Slimeballs!