Ex-president Evil "Good Guy" Bush
ObamaRahm-a said today that he always thought that Bush was a "Good Guy". Now we KNOW what to expect from ObamaRahm-a (MORE OF THE SAME and UTTER DISASTER!).

How about this for a start: ObamaRahm-a is gonna WASTE $45million of destitute American taxpayers' $$$ on his 'Coronation' (Inauguration). Does he have any idea how many starving Americans can be fed with $45million? - starving Black children, even! Does this Clown (TIME will tell)... 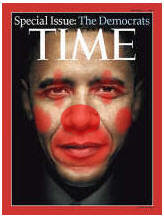 expect to be taken seriously? (I can think of a better word than Clown). $45million is what Dubya wasted on his 'Coronation' - where's the CHANGE? Bush is personally responsible for the death, maiming, torture and suffering of HUNDREDS OF THOUSANDS OF IRAQIS, AFGHANS, PALESTINIANS, LEBANESE AND AMERICANS! - including women and children. For a more complete list of diabolical actions by Bush, a "Good Guy", according to ObamaRahm-a, check my previous posts. Let's not forget that it was Bush who let the Israeli Zionist Slimeballs 'get away' with 911 and 'Death by 1000 Cuts' (Grand Depression), administered under his 'watchful' eyes by that Zionist Sorcerer (Greenspan) and his Zionist Apprentice (Bernanke), not to mention Hanky-Panky Paulson, an 'Auslege Goy', like Bush himself. Was trashing the Constitution (repeatedly) the action of a "Good Guy"? How can ObamaRahma-a possibly call the worst president in America's history a "Good Guy"? Are habitual deception and blatant lying the actions of a "Good Guy"? ObamaRahm-a must be judging Bush in comparison to himself and his planned actions!

GOD HELP US ALL!