That brilliant Zionist Super-Shill Karl Denninger has outdone himself with his article today (Heh CONgress - Wake Up!). It is worth reading because Karl comes within a hair's breadth of unveiling the entire Zionist Slimeball GAMEPLAN - even naming the major criminals and calling THEM criminals (Greenspan, Bernanke & Paulson). Yes, Karl, you identified some of the Zionist criminals and the fact that THEY DELIBERATELY engineered the Grand Depression and Systemic failure of our financial 'House of Cards' (giant Ponzi scheme). Now, if you will just connect a few more dots (911, USS Liberty attack, 'War of Terror', PNAC 'Greater Israel' Invasion/Occupation of Iraq, etc.), I may have to reclassify your status as a Zionist Super-Shill! These Zionist traitors should be ARRESTED NOW and tried for High Treason - before being hanged until they are dead. That includes that Zionist 'Auslege Goy' Bush and (most probably) the 'Auslege Goy-elect' ObamaRahm-a as well - and his horde of Zionist advisers and Cabinet member nominees. Let's clean the entire House (CONgress) and the white House, while we're at it. And don't forget, Karl, Congress is 'Zionist Israel-Occupied Territory' - just like the WH and most of America's institutions.
Then, let's declare WAR on the traitorous and rogue State of Israel for attacking America on 911 (not to mention the numerous prior attacks and the odd assassination of America's leaders {JFK, Paul Wellstone, etc.}). A few well-placed MIRV nukes will do the job and Yahweh will appreciate our help for His 'Final Solution' to the "Rebellious House of Israel" problem. Then, you can join the rest of us (humanity) in dancing and singing to the strains of 'Hava Nagila' (Let us Rejoice). PROBLEM SOLVED! We'll just take the melted gold from the Israel parking lot and go back to the gold standard for backing ALL of America's debt. There should be enough gold in the Israel parking lot to stuff Fort Knox to overflowing! - especially if we include the monumental Golden Calf which those Zionist Slimeballs have been worshiping for generations. ;)

If we're going to launch a full-scale attack, Karl, let's make sure we have identified the right enemy - ALL of THEM! 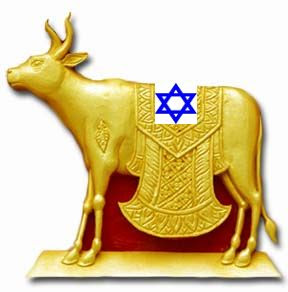