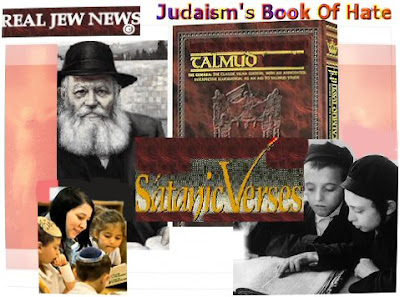 If you care to dig into the ROOTS of ZIONISM, there are some edifying, eye-opening and monumental 'OLDIES BUT GOODIES' SCHOLARLY STUDIES about Talmudic Judaism: 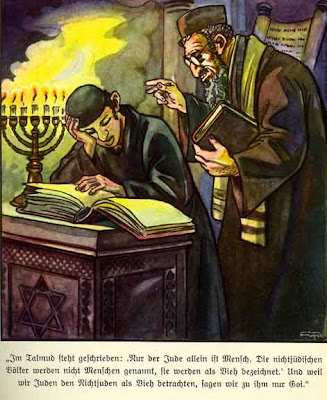 TRANSLATION:
"In the Talmud is written: 'Only the Jew alone is human.
Non-Jewish peoples are not called human, they are described as cattle.'
And because we Jews look upon the non-Jew as cattle,
we only call him 'goy'."

This explains a lot of Zionist brutal behavior and callous attitudes,
especially how the IDF treats Palestinian civilians,
including (pregnant) women, children, babies and old folks.
Most people treat cattle FAR better than the Israelis treat Palestinians.
Most people only slaughter cattle for food -
the Israelis slaughter Palestinians (and others) out of religious fervor.
What does that tell you about their religion and their future plans?
Palestinians are only the most immediate victims of Israeli Zionism.
The rest of 'goyim' humanity (including Americans) are NEXT!
911 and the GRAND DEPRESSION are acts of 'cattle' slaughter.
Do the '5 Dancing Israelis' on 911 make more (ghastly) 'sense' now?
THEY think 'cattle' mutilations are G-d ordained, fun-and-profit!
(A Palestinian liver is just like a calve's liver - Organ 'harvesting')
Are you still wondering why Jesus {the Son of God} called THEM...
"The Synagogue of Satan"
?

The Spawn of Satan (Zionist Slimeballs) WILL be Exterminated!
"He will also do it"
(''He'' is Yahweh)
Ezekiel 22:20

"The Traditions of the Jews"
(Johann Andreas Eisenmenger)
(excerpts from "Entdecktes Judenthum" in English)
by J. P. Stehelin

These monumental works can be purchased most cheaply
through Michael A. Hoffman's website

Be prepared for
'SHOCK and AWE'