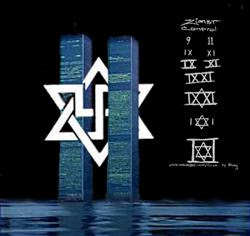 The March 12 post contains a graphic design titled:
"ISRAEL DID 911 - TREASON"
Various products with that design were offered FOR SALE at my Zazzle Store. Today, these products were removed from that Store by the Zazzle Zionists because the content was deemed to be "objectionable". I have NO DOUBT that they are VERY objectionable to the Israeli and American/Israeli Zionist Slimeballs who did 911 and then did the COVER-UP of 911 - as well as to their Zionist Shills who are EVERYWHERE, in and out of cyberspace. Only 4 "ISRAEL DID 911 - TREASON" buttons (4" size) were ever produced and delivered to me. One of them is displayed in a public place. The remaining 3 buttons are still in my possession. I deem them to be "Collectors' Items". The March 12 post shows you what they look like. They will turn up in public places in due time. Meanwhile, it's high time to "get the word out" that Zionist Slimeballs did 911 - and to have THEM! brought to Justice (and Execution). THEY! will NOT get away with the cold-blooded murder of almost 3,000 people! (Ezekiel 22:20).

"MISSING LINKS"
is worth watching for a lot of 911 truth but it contains a DECEPTION:

THEY! are not Jews but the
Synagogue of Satan!

ZIONAZIS is a fitting name for THEM!

(ZIONAZIS are Agents of the ALIEN RACE)