Don't be fooled by the G20 (or G8) BS, now flowing out of Toronto. Zionist Slimeball Agents of the ALIEN RACE are doing the global GRAND DEPRESSION, still in progress. It fits right in (The Puzzle) with 911, the USS Liberty attack, the JFK assassination, the Freedom Flotilla attack, the Gaza Gulag genocide and all those other ZIONIST CRIMES, which the Zionist-controlled MSM conceals from America and Humanity every day (Rupert Murdok and his Israeli masters). The governments of America, including Democrats (ObamaRahm-a, BJ-Bill, etc.) and Republicans (Bush-it, etc.) have been and are CONTROLLED by these Zionist Israeli Agents of the ALIEN RACE, who LIE through their teeth.

"We, the Jewish people
(Zionist Slimeballs),
CONTROL
America
and the Americans know it!"
(Ariel Sharon) 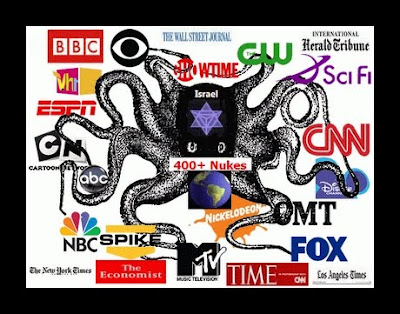